DRAGONWRITER:
A Tribute to Anne McCaffrey and Pern
ed by Todd McCaffrey

The dedication for Dragonwriter is to “all those who have found solace in the Worlds of Anne McCaffrey and Pern” and that’s exactly who this collection is for. All of us who’ve dreamed of her dragons, of flying her brainships, of being a Talent in our own right.

These essays all encompass different aspects of the same great woman, yet cross and overlap consistently to paint a picture of this larger than life, mischievous person who is Anne McCaffrey. Some of the essays head into the history of McCaffrey’s career, detailing certain aspects or shedding light on events that became turning points. Some of them give larger, more macro-oriented overviews. And some are more personal, more focused on the relationship between essay writer and McCaffrey.

All of the essays come from the writer’s specific viewpoint, highlighting the ways they knew McCaffrey and how she affected or influenced them. The writers are an eclectic bunch, with some of them being fellow writers who were either inspired by or mentored by McCaffrey in some way. Some of them knew her in other ways, such as being an editor she worked with, convention runners, a singer/songwriter, a cover artist, and, of course, her children, each of whom leave their own mark within these pages.

I recommend this non-fiction book for all who fell in love with McCaffrey’s fiction, regardless whether it was Pern who first brought you to her work or another of her series, especially as The Ship Who Sang is referenced a great deal, particularly in one emotional essay. This will only heighten your appreciation for these stories, as well as making you fall in love with the woman behind the words.

I haven’t posted this before, but I feel the need to announce I’m now the parent of a teenager and have been for a few months. I don’t feel old enough to have a teenager. Nor do I feel capable of keeping up with feeding one. How does one do that? Add an addition to our pantry? Daily drop-offs from the grocery store? Buy intravenous feeding tubes? If ever there were black holes on earth, they would be teenaged stomachs XD 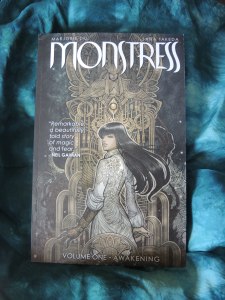 The first thing you notice about these graphic novels is the gorgeous artistry by Takeda. She brings such detail into every panel, making every page a thing of beauty to be admired. The world itself, as grim as it is, is vast, multi-cultural, with layers hidden within layers. Just for those two aspects, Monstress is worth reading. But there’s more. The character of Maika is conflicted, blunt, and horrible, yet also one who evokes sympathy. She fits in that classic trope of the abrasive character who does her best to keep people away from her for their own good. Yet she’s failing even in that and desperate for answers to what is happening to her. There is a cast of secondary characters both interesting and strange and Liu does not shy away from showing the dreadful sides of avarice and bigotry through them all.

Both my children stole all three volumes from me to read. I haven’t even read the third volume (though they have), so I guess it gets the stamp of approval from a younger generation too :)

As You Wish by Cary Elwes

Does this count as Fantasy or Science Fiction? Maybe not :) It’s all nonfiction, relaying fun stories through Elwes’s eyes during the process of making The Princess Bride, one of the most iconic movie/book combos of the last century.

There was at least one vignette I was already familiar with, so I’m assuming I read an excerpt of the book at some point, but most of the information was new to me, and given it was filtered through Elwes’s eyes, it carried an air of nostalgia with an overlay of all of his excitement, nervousness and, occasionally, embarrassment.

You get to walk through the process, from him first getting the job to the final days. Get to hear about the arduous process of creating the duel between Cary Elwes and Mandy Patinkin. For me, it felt like traveling back in time to my childhood.

The Princess Bride
by William Goldman

Speaking of The Princess Bride, why yes, I was inspired to pick it back up. I’d never read it all the way through, just bits and pieces. And before I get to the story, I’m going to fully admit that I was one of those many people (long ago) who thought the book was actually abridged and searched for the unabridged version to no avail. Luckily, I don’t also have to admit that this happened recently (but I did have a moment–just a moment--when I picked it up off the shelf and thought wait–what? In my defense, I had just learned that Dune had an abridged version and I went searching to figure out whether I’d read the wrong damn book some twenty-five years ago. Spoiler alert: I hadn’t. I read it in all its wonderful glory the first time.)

The story is almost completely the same as the movie, with the notable exception being the Zoo of Death, which was understandable in its absence in the movie, but also pretty entertaining. There are other smaller changes as well, but none of them huge or plot/character changing. This is one of those, if you love the movie, you will undoubtedly love the book and vice versa. However, that doesn’t mean it’s not worth the read if you’ve already seen the movie. Just the opposite.