My Odyssey Workshop Experience: The Slam

The Odyssey Slam occurred exactly halfway through the workshop. Normally, so I’ve heard, the Slam would occur at a local bookstore. Instead of a bookstore, we did a Zoom “party” where only the person reading at that time would have their camera turned on.

We got to invite three people. One of my invites was my mom. Unfortunately, my family got double-booked that day with my niece’s second birthday also being held as a zoom event with the overlap being across the first hour of the Slam.

This meant I had to request a late time slot in order for my mom to get to see me read. Boo :(

I’d been really wanting one of the first slots so I could do my freak out, get the read over with and truly enjoy everyone else’s stories. Instead, I sat in a puddle of anxiety that ticked higher after each subsequent person read their story. I’m ashamed to admit that I can’t remember a single word of the story of the person who went directly before me because I was sitting in a haze of don’t-panic thoughts. 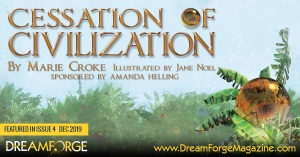 This was the story I read during the Slam

The story I chose to read was the flash piece “Cessation of Civilization” that had originally been published in December 2019. This meant that I didn’t have to write a piece for the Slam (thank goodness). I practiced it all morning, with my partner giving me tips on how to “look up sometimes!” So I made it through the read generally unscathed. END_OF_DOCUMENT_TOKEN_TO_BE_REPLACED

One of the other meetings that occurred, this one weekly, were Friday meet-ups that either took the shape of a Salon discussion or a Game.

Maybe about half the class showed up to these events, some people starting the event and then making their excuses. I think I went to all of them.

The Salons centered around stories or story-telling methods generally. We discussed pre-class readings, both fiction and non-fiction, where I was intrigued to discover just how the views changed from person to person on the pieces we’d read. There was one story especially that many of us read it completely differently, which was incredible and eye-opening.

That being said, it was the Games that were the most fun! :) We’d have to come up with plot additions, with changes in character motivation. Or we’d have to craft world-building additions that wouldn’t contradict a prior rule already stated.

And, of course, there were options to contest an addition to the working plot or world, etc. So there were plenty of arguments as to what would work, what wouldn’t work. END_OF_DOCUMENT_TOKEN_TO_BE_REPLACED

My Odyssey Workshop Experience: The Critiques

For Odyssey, each student had to turn in six stories. Four of them are for in-class and two are for private critiques with a guest.

The in-class critiques are done in a typical manner: round-robin, each person given a limited time to speak their thoughts on the piece, starting with positives, the author remaining silent until the very end.

One of the mantras for any critique circle or workshop is that what is said during critique remains in the critique. We didn’t discuss stories outside of the critique time except to ask what an author might be planning to do with it or something else similarly innocuous. And I’m certainly not going to discuss what was talked about here.

That being said, I do want to put down a few memories of these six weeks. 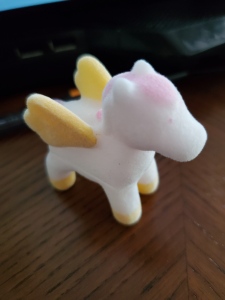 For our first two in-class critiques, we received little gifts to open afterward. This was my first, that I forgot to open after my critique XD

Because we were doing things virtually, we had deadlines early morning (at least for me, some people were outside of the time zone) before lecture started to mimic the turning in of our stories in class. We had to save and upload our final draft on a board so that all other students could download the stories. These deadlines happened approximately six times during the six weeks (a few people had to send their first sub before the workshop began) so the deadlines were staggered so only 2-3 people had to do a turn-in each day.

We also had a similar deadline each morning for our due critiques. These would be the stories with our documented notes and thoughts. We would upload our critiques as a response to the author’s story, many of us saying something positive in the comment section. END_OF_DOCUMENT_TOKEN_TO_BE_REPLACED

My Odyssey Workshop Experience: The Introduction

For those unfamiliar with how the Odyssey Workshop works, it is a six week long course that includes lectures and full-class critiques. There are added Q&A sessions with visiting authors and editors (though “visiting” is only loosely used this year given everything was virtual), a Slam event, and many small side meetings and check-ins. 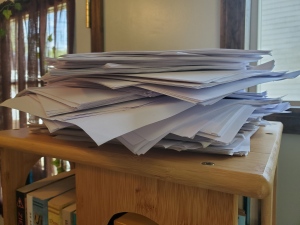 WHAT IS TO COME!

I’m going to admit, I have always been terrified of anything that draws people’s eyes toward me. The more people there are, the more terrified I get. The more time I have to think about it beforehand, the more anxious I am. There doesn’t need to be a stage. There doesn’t need to be a microphone. There just needs to be people, the anxiety going up in an exponential way according to the total.

So there were a number of situations about the workshop I knew I was going to be muscling through by sheer force of will. First up: the dreaded icebreaker meet.

None one likes these, least of all anyone with even a modicum of social anxiety, and being on a virtual setting does not change things. [I did have bare feet (as I did for 99% of the workshop) to give me a small level of comfort.] I got to meet my fellow Odyssians for the first time via their heads, torsos and backgrounds. We did a typical icebreaker game that divided us into breakout rooms a few of us at a time, and that had the typical stilted conversations that come with having no idea who you’re talking to. END_OF_DOCUMENT_TOKEN_TO_BE_REPLACED

My Odyssey Workshop Experience 2020: The Prep

I wrote most of this back at the beginning of my Odyssey Journey and then got incredibly busy. Just imagine this from the end of May/beginning of June time period:

Now onto the true beginning!

After being accepted, and choosing to attend virtually on account of COVID, I had to send in two assignments. One was a newly written story (which ended up naturally falling below 4k words when I wrote it and immediately got ear-marked for Odyssey for that reason alone) and the other was a favorite short story written by someone else (I chose Playscape by Diana Peterfreund in case you were wondering because seriously, it’s awesome and you should read it).

Over the next two weeks I received a textbook and a bunch of emails for typical things you’d have for a class (schedule, syllabus, questions, assignments, etc.) plus a few that likely were specially for this year’s virtual alteration for the workshop (like how we’re going to communicate and upload documents, etc.).

Then, in the weeks right before class was to start I worked on readings with my trusty pink and blue highlighters (because yellow is just so…ugh), while cramming disagreements (and agreements) in margins (harder to fit disagreements though; so much more to explain). I ended up filling an entire small notebook with all my thoughts and had to move on to another, so that seems to be a setting stage for this workshop. Maybe I won’t have any free notebooks left by the time it’s over (unlikely, since I have a crass amount of them, but you never know). 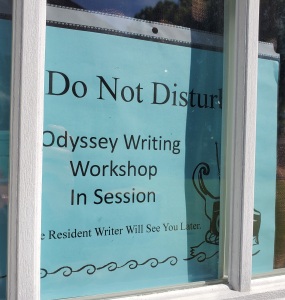 My handwriting is already jumping between seamless and even to barely legible.

I already had a small office setup that I could use as my “lecture hall” so to speak, so I cleaned it up, set up one of the signs that Jeanne Cavelos sent me in the window and sat my kids down to explain that they were to NOT DISTURB ME UNLESS THEY WERE DYING, which I think may have gotten the point across.

And then…I thought I was ready.