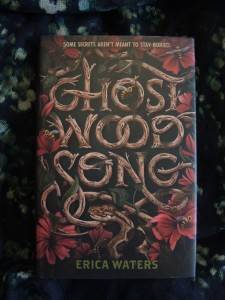 There’s something haunting about this novel. It follows a young woman who grew up in a house with ghosts, ghosts that would appear whenever her father played his violin. Now, her father is long dead and she has taken up music in much the same way her father had, with dreams of his violin haunting her, as if the instrument calls for her to play it.

Grief plays a large part in this novel, as Shady works through her emotions that still linger on since her father’s death. The magic in this story is a slow crawl, that rises via music and threatens to destroy Shady’s life rather than solve the problems surrounding her family and their painful, tragic history. This novel is atmospheric, with a great cast of flawed, relatable characters. Care is given to the romantic relationships Shady is pulled between, respecting both sides of her bisexuality while also acknowledging the importance of platonic friendships.

This is a contemporary fantasy, set in a rural area of the United States.

They left me to drown, sea salt clinging to the back of my throat.

I could hear the rolling rhythm of their rowing chants, drowning out my cries as succinctly as the sea would soon drown me.

~"All the Boys in the Sea" (in Fireside)

Sometimes, and I’m stressing the sometimes, wishes muttered within my hearing come true. I’ve invested in a good set of earbuds, noise-cancelling headphones, and have an over-spilling jar of earplugs, yet accidents still happen.

“Wish you’d always be my Dasher,” this young guy in a neon orange slouch hat says and I swear if he could blow me a winky-kissy-face emoji he would.

~ "Delivery for 3C at Song View" (in Diabolical Plots)