“Dance of Wood and Grace” Published in Zooscape Magazine!

Dance of Wood and Grace has been published in the March 2021 issue of Zooscape Magazine! This is my second publication of the year and my first appearance in this adorable furry magazine.

Dance of Wood and Grace is about a sauropod-like creature named Dirt of CrystalSleep who is born into a city where the caste-system is stringent and specific. Yet, that doesn’t stop him from harboring a whisper-want for something different.

The inspiration for this story came from body mutilation and how in many western cultures and religions those mutilations are frowned upon, to the point where career paths and job security is put at risk because of them. I wanted to explore the idea that many of us don’t settle for the “pure” body we’d been born to, for the image we have, the delight we gain, the feeling of belonging in our own skin, is worth facing off against cultural stigma.

I hope that this story speaks to anyone with piercings, with tattoos, with surgeries of any types or desires for those surgeries, for anyone who has felt looked down upon for their choice in expression of their very selves.

In a metaphorical sense, this story also represents going after that which your are most passionate about, regardless of your level of skill. I know so many people who are miserable in jobs they’re well-suited for, who ache for something different. But again, cultural stigma strikes here as well, pushing us all into shapes and places we would rather not live in.

So I hope dearly that this story speaks to everyone who has ever had a passion and yet was told that they weren’t good enough at it, that they were too old to start a new career or a new hobby or a new anything simply because it’s something you’ve always wanted, something where you find satisfaction and contentment.

Dance of Wood and Grace can be read for free here!

BLACK SUN
(Between Earth & Sky I)
by Rebecca Roanhorse

Roanhorse has an easy reading style that quickly immerses you into this wonderful world filled with tales of gods and sea-people, crow-riders and spearmaidens. There are giant water spiders and blood magic and a city that stretches vertically above a river. And that’s just the tip of the awesome world-building.

This is a political drama mixed with an adventure journey featuring three lead point of views: a Sun Priest, a Crow God and a woman of the sea. This is a tale about setting right past wrongs, about vengeance and power and, ultimately, the desire for peace and respect.

Serapio, a blind man from the mountains, journeys with Xiala, a captain in need of a ship, toward the great city of Tova where the Sun Priest and all her dedicants prepare to welcome the eclipse. This is the beginning of an epic fantasy trilogy inspired by historical cultures in the Americas.

“How Many Crab Pots Does it Take to Destroy a Neighborhood?” Published in Dark Moon Digest 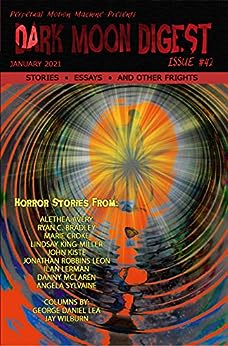 See, I grew up in a bayside community in Maryland. A little bay. Not the big Chesapeake. But even little bays feel huge when you’re little yourself.

We’d throw crab cages off the end of the dock and see bobbing milk jugs along the edges of the bay that marked where others had done the same. Old Bay is a staple where I’m from, practically an appetizer. Blue crabs adorn art pieces, sports team jerseys, and fill plenty of bellies, some people using crabbing to offset grocery costs.

Thing is though, I’m not a fan of crab. Not a fan of Old Bay, and the joke that I’m not Marylander enough to be a Marylander occurred more than a few times in my youth. I would crack crab legs open for my younger siblings, but I would never eat it myself.

So I thought, why not use that difference in me, play with the crabs who aren’t too fond of this fondness that Marylanders have for them.

And then things turned creepy quite quickly.

You can find this issue with my story, “How Many Crab Pots Does it Take to Destroy a Neighborhood?,  on Amazon or on Perpetual Motion Publishing’s site.

My Odyssey Workshop Experience: The Slam

The Odyssey Slam occurred exactly halfway through the workshop. Normally, so I’ve heard, the Slam would occur at a local bookstore. Instead of a bookstore, we did a Zoom “party” where only the person reading at that time would have their camera turned on.

We got to invite three people. One of my invites was my mom. Unfortunately, my family got double-booked that day with my niece’s second birthday also being held as a zoom event with the overlap being across the first hour of the Slam.

This meant I had to request a late time slot in order for my mom to get to see me read. Boo :(

I’d been really wanting one of the first slots so I could do my freak out, get the read over with and truly enjoy everyone else’s stories. Instead, I sat in a puddle of anxiety that ticked higher after each subsequent person read their story. I’m ashamed to admit that I can’t remember a single word of the story of the person who went directly before me because I was sitting in a haze of don’t-panic thoughts.

This was the story I read during the Slam

The story I chose to read was the flash piece “Cessation of Civilization” that had originally been published in December 2019. This meant that I didn’t have to write a piece for the Slam (thank goodness). I practiced it all morning, with my partner giving me tips on how to “look up sometimes!” So I made it through the read generally unscathed. END_OF_DOCUMENT_TOKEN_TO_BE_REPLACED

We built a patio this June, something large enough to eventually put in a fire pit and bench when we get our strength and motivation back (and maybe when summer is starting to fade). I have been informed I could now officially be an apprentice to a mason as I have gained some basic sand-slinging and leveling skills.

Taught my son to play Misty Mountains on the keyboard as well! He picked it up quick enough, transferring over his training from the violin, and we had a great time coming up with personal mnemonics to remember the notes. Great Big Dinosaurs Fart Atrociously was perhaps the winner. He’ll certainly not forget it, which was the point XD

These are my favorite books I read in June, with an addendum that I also read and enjoyed Sorcery of Thorns by Margaret Rogerson (a YA Fantasy about dangerous, fantastical libraries) and that it’s gone on my shelf awaiting to be picked up by the girl in a few years.

This book. Probably one of my favorites for the year so far. While reading I could clearly see the nod to Agatha Christie and it was no surprise to discover Turton made a comment about her in his Q&A at the back end of my copy. This blend of mystery and fantasy is one I continually reach for and yet, quite often, the urban fantasy that overwhelmingly attempts to tap into the mystery genre does not come close to satisfying my desires. The Seven 1/2 Deaths of Evelyn Hardcastle went beyond my expectations despite all the praise I knew it to have. The prose by itself would have made the story. Then add in all the twists, the turns, the confusion and excitement, and the existential question of who is Aiden Bishop underneath all these hosts he wears made this novel go straight to sitting next to some of favorite Agatha Christie. I can not wait to see what Turton writes next!

Sequel to Space Unicorn Blues, Five Unicorn Flush came out this past May and covers what happens after the separation of some of the characters at the end of the previous novel. I can’t say much for fear of spoilers, however, I was relieved that our lead, Jenny, did not suddenly and magically become able-bodied, since that would have felt unrealistic and unachievable, and she continued to be the stubborn, successful character we met before. The darkly humorous bent this series owns continued on through this book, making it fun despite serious under-workings.

I don’t normally recommend the middle grade books I read to my kids, but this book is so touching and well-crafted I can’t help but make an exception. The main story is told by an African grey who desperately wishes to fly free from the pet store in which he’d been born, while two other (human) characters are shown through journal entries and letters. The underlying theme of grief and growth is seamlessly folded into each character’s arc in a poignant, but different way. Enough so that while reading the second half of this book my daughter kept telling me she felt funny, felt like she needed to cry, and I agreed with her wholeheartedly. Even better, Leonardo took famous poems as inspiration to write others from the bird’s perspective in such a way that the poems were accessible to children who had never heard of Carroll or Frost or Keats. I ended up adoring this book!