We ended up breaking in the new patio with a barbecue. Was pleasant to actually have space enough for people for the first time :) After, Steve went out and bought a on-clearance gas fire pit that almost (but not really) matches the blocks we used. Call us lazy, but building a patio was a bit back-breaking so I’m just as happy to hold off on the next phase.

We had a bit of a medical issue with the girl that was originally diagnosed as cat scratch disease, allowing the sores to spread all over her body, only to have it end up being impetigo. Miss Thing got blamed at first and it wasn’t anything to do with her! Poor girl has been on medicine for the past two months to keep her nose from breaking back out in a rash again, but at least the rest of her sores have healed up or turned to scars.  That’s been an adventure.

This was my first time reading Novik’s work and I’m right now waiting for my library to get in Her Majesty’s Dragon to keep going :)

I adored this novel. I normally read library books and only buy when I loved the book yet this one I bought before I’d even finished reading the story. It’s technically a retelling, a tale about a dark Wood that is swallowing the land and all of the inhabitants, with only a single wizard standing in the way. The lead is a stubborn young woman convinced more can be done. She’s heroic without being masculine, powerful without being cruel. The Wood itself is terrifying in its creation and yet gorgeously described. Highly recommend this one! 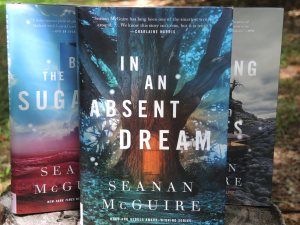 Down Among the Sticks and Bones, Beneath the Sugar Sky and In an Absent Dream by Seanan McQuire
(Portal Fantasy)

I read the rest of McQuire’s Wayward Children series in July and found them to be just as dear as the first. Sticks and Bones is a wonderful example of how expectations and pigeonholing our children (and adults) will stunt them, force them into a mental frame where they imagine they can only be this or that, but never this and that. Sugar Sky is more a quest-type tale, but gave us a journey through multiple worlds where the rules aren’t always the same, which is no different then growing up, moving away, and realizing that sometimes everything you’ve learned no longer applies in this new place. In an Absent Dream is arguably my favorite of the series thus far. The goblin market is destructive and manipulative and yet seductive in its inherent fairness. It also holds a lesson at its heart: that fair doesn’t always mean right and equitable doesn’t always mean the same. These are perfect for both adults and youngsters.

Gods, Monsters, and the Lucky Peach by Kelly Robson
(Science-Fiction)

This is one of those stories that sticks with you, making you think, long after you’ve finished. Robson packed so many ideas into such a small space that you might suspect there’s not enough room for it all, but there is. She handled ecological concerns, bodily biases, and historical tampering all along with the simpler themes of the morality of playing god and asking the questions of what makes a monster a monster. The interpersonal conflicts of the characters were on point as well because traits were called out, forcing the lead to reexamine her beliefs and behavior.