Where last time I recommended all fantasy books, this month I decided to go in the complete opposite direction and talk up some science-fiction books I’ve read recently.

The biggest compliment I can say about Ninefox Gambit is, I wish I’d picked it up sooner. Far sooner. Back when it’d first come out sooner. On the other hand, then I wouldn’t be able to immediately have access to its sequels, so there’s a huge positive about waiting until the trilogy is complete.

This story takes science-fiction world-building and turns it inside out and upside down, in a unique way, yet using older, easily grasped ideas. For instance, it’s a combination of military fiction with religious zealotry, using the fantastical element of never-ending life with political drama, all within a blow-by-blow space-siege operation.

It’s disturbing at times, but more in the psychological effects that result from the different factions’ stringent beliefs. What’s truly interesting is that the six factions are meant to be specific in their skill-sets, which is a common enough idea in SFF, but here, there are added layers of duplicity that give lie to some of that “dogma.” 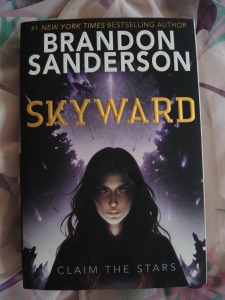 by Brandon Sanderson
(YA Science-Fiction)

Fast-paced, with a lovable, sympathetic lead character, Skyward is a blast to read. Sanderson doesn’t shy away from hitting hard to represent the dire straits the people of Detritis find themselves in, nor does he cheap out on easy solutions. All of the characters are flawed, in conflict with one another, yet you never feel as if the book is choosing to elevate one character over the others in some sort of moral high ground.

Questions about cowardice form one of the central themes in the novel and Sanderson fields all those questions expertly, never quite landing on a specific, all-encompassing definition, but rather showing how cowardice is defined by each individual character and how that shapes their actions. Which I personally think is a perfect way to handle something of this sensitivity, given each of us will come with our own, personal definitions.

The novel is fast-paced and fun and while it’s technically YA, it’s the sort of story that can be enjoyed by a much wider audience.

I’m calling this apocalyptic, but it isn’t truly. It’s far more hopeful than any apocalyptic novel has any given right to be, so it’s more of a tale of a beautifully growing society after a fall.

The book takes place in two time periods, switching every other chapter. One is the present where the lead must discover the mystery surrounding a death that has occurred in one of the communities. She has little history to lean on as murder isn’t something that generally occurs given how tight-knit the communities are in the book. The second is a linear flashback documenting an adventure she’d taken when younger that ultimately walks us through the world as a whole, the differing societies and the difficulties in relation to sets of rules and morals and beliefs that her community has accepted where others have not. The two threads come together thematically toward the end.

This one I read to my daughter and I found it easy to read, easy to  keep her attention and absolutely hilarious for both of us. Once finished, she immediately took it to bed for nights on end, rereading favorite scenes that had her cracking up.

The story itself surrounds an AI in the shape of a boy who loves to learn new things (Cognitive Development). He’s joined by a group of other robots – a trashbot, a dog, a car – in the search for someone he cares about and in the process discovers a whole lot about who and what he is and what he believes is right.

It’s a tale far funnier than a lot of humor I’ve read and yet still retains a deeply touching narrative. Highly recommend to anyone with kids, and to people without them who still embrace their childhood side. :) As a side note, Cog is up for  Nebula Award this year, so there’s even more of a reason to check it out.